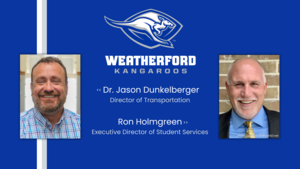 Dunkelberger began his educational career as a Senior Army Instructor and JROTC leader at Albert Gallatin High School in Uniontown, Pennsylvania, in 2013. Dunkelberger then moved to Texas to serve in the same role at Benbrook Middle-High School where he remained until 2018.
He then moved into campus leadership, serving as the dean/assistant principal at the Bill R. Johnson CTE Center in Crowley ISD in 2018. Dunkelberger then served as assistant principal at Keller ISD campuses Chisholm Trail Intermediate School in 2019 and Fossil Hill Middle School in 2020. He moved into his role in Lake Worth ISD in 2021.
Dunkelberger earned his bachelor’s degree in information systems from Robert Morris University, his master’s degree in business and marketing from University of the Southwest and his doctoral degree in educational leadership from Liberty University.
He and his wife, Lisa, have four children.
Published June 29, 2022 Print