WHS performance of 'The Wizard of Oz' Jan. 30 - Feb. 1 in Durant Auditorium 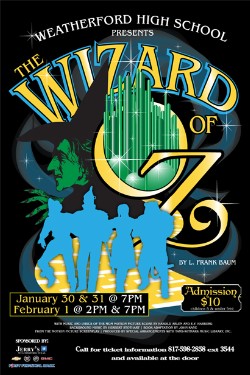 Weatherford High School's production of "The Wizard of Oz" will be Jan. 30 - Feb. 1 in the WHS Durant Auditorium.

The event, which is sponsored by Jerry's GM in Weatherford and First Financial Bank, includes a large cast and crew by WHS students as well as band members playing in the orchestra pit.
Admission is $10 each (children 5 and under are free) and may be purchased at the door. Also, for additional information about tickets, please call 817-598-2858 (ext. 3544).
"The Wizard of Oz" contains music and lyrics from the MGM Motion Picture Score by Harold Arlen and E.Y. Harburg, background music by Herbert Stothart, and book adaptation by John Kane. The performance is from the motion picture screenplay and produced by special arrangements with Tams-Witmark Music Library, Inc.