“We’re proud that this is our tournament’s 20th year,” said Brent Baker, Booster Club president. “The late Don Allen and others started this event in the mid-90’s, and we’d like to dedicate this year’s tournament to him. Thanks to Jerry and Charlie for helping us continue the tradition.”

The Weatherford varsity will begin the tournament against Burleson at 10:30 a.m. Thursday. The Roos’ remaining game times will depend on their bracket position. Weatherford’s JV and both freshmen teams will also participate in the tournament.

“Last year, several visiting coaches told us that this is their favorite tournament of the season,” Baker said. “We’re going to continue that Weatherford hospitality this year. Coach Charles Tatum, Coach Jordan Coffman and others do a great job of organizing the tournament, and we have a team of hard-working volunteers.” 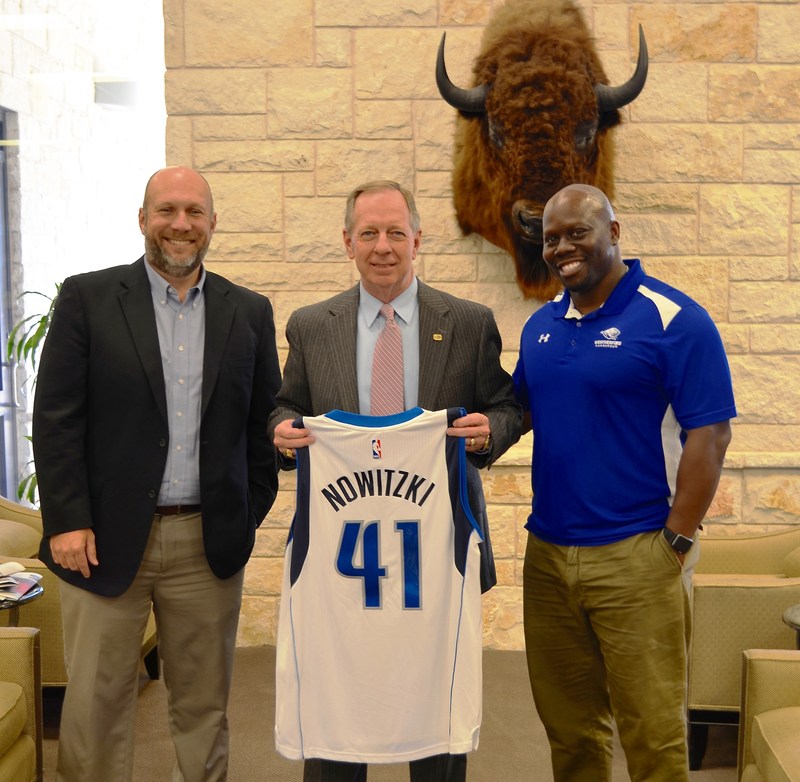 A signed Dirk Nowitzki jersey, donated by PlainsCapital Bank, and many other great live and silent auction items will be up for grabs at the Weatherford Kangaroo Basketball Tip-Off Event scheduled for Tuesday, Nov. 17 at 6:30 p.m. in the WHS Gym. The fun, free event will also feature a three-pointer contest and a sneak peak at the 2015-16 WHS teams. Pictured are (left to right) Booster Club President Brent Baker, PlainsCapital Bank President Pat Hamilton and new WHS Head Boys Basketball Coach Charles Tatum.
Read More »
Published November 9, 2015

Our Kangaroos are still in the hunt for the playoffs so wear your Roo Blue spirit attire tomorrow in support of our WHS football team!

We are monitoring the weather for tomorrow night’s game that will be played in Arlington at Wilemon Field at 7:00 pm. Right now we don’t expect the game time/day will be changed. If there is a change, we’ll send an All Staff email and post information on the web and our social media sites.
Read More »

Due to the forecast for inclement weather on Friday evening, the Weatherford HS varsity football game will be played on Thursday at 7:00 pm at Kangaroo Stadium. Come out and cheer for our Roos as they take on Arlington Lamar!

*All tickets sold for this week's game will be honored on Thursday night.
Read More »
Published October 28, 2015

The Freshman and JV football game dates have been changed for this week to Wednesday, October 28, 2015.

A decision will be made by Wednesday morning regarding the varsity game if forecasted weather conditions indicate a strong possibility for thunderstorms for Friday evening.
Read More »
Published October 27, 2015