A Message from Dr. Rees

Hello Weatherford, Texas!  My name is Beau Rees and as of Monday, June 1st, I am the new superintendent of schools for Weatherford ISD.  A few of the many qualities that attracted me to this fine city (besides the incredible school district) are the salt-of-the-earth people, the hometown feeling, and the strong sense of community pride. These traits are hard to find, and we are all blessed to live, work, learn, and play in Weatherford.

Please click the headline to be directed to our web page with information about registering for the full day Pre-K program or for grades K-12.
Read More »
Published May 5, 2020

Pandemic Electronic Benefit Transfer (P-EBT) is a one-time food benefit for families who lost access to free or reduced-price meals due to school closures. Eligible P-EBT families have received application instructions from schools this week. The P-EBT application will open the first week of June. P-EBT food benefits are for children who received SNAP food benefits for March 2020 and children who are certified for free or reduced-price meals during the 2019-20 Texas school year.

The online application for P-EBT is now open. Please review the following letter to see if you qualify to apply to receive these benefits. The application link is provided within the letter. 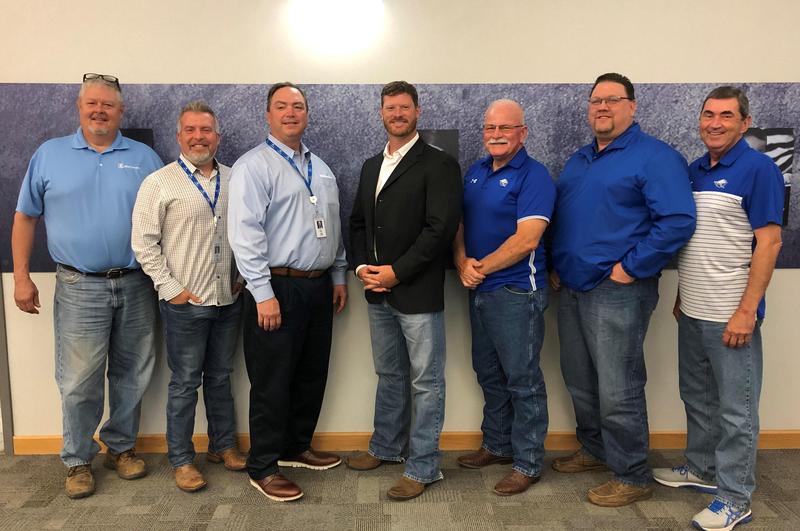 Weatherford ISD school board members unanimously approved Billy Mathis as the Athletic Director for Weatherford ISD in a Special Meeting on June 1, 2020.

“We are pleased to announce Billy Mathis as Athletic Director,” said WISD Superintendent Dr. Beau Rees. “Coach Mathis is committed to building a winning program at the high school and middle school levels and will replace Richard Scoggin who announced his intent to retire in March. In addition to his responsibilities as Athletic Director, Coach Mathis will remain head coach of the Weatherford Kangaroos varsity football team.”

As head football coach, he led the Weatherford Kangaroos to the District 3-6A playoffs in 2018 and 2019. Mike Guest, president of the WISD Board of Trustees, said, “Coach Mathis has shown his passion and vision for the success of our student athletes. I firmly believe he will take our programs to the next level.”

Billy Mathis said, “It is a great honor to be selected to lead the Weatherford ISD Athletic department. I truly believe that we have great students who can reach their personal bests with great coaching and personal determination.”

Coach Mathis has been the head football coach and Assistant Athletic Director since 2017. This is his 15th year in public education.
Read More »
Published June 1, 2020 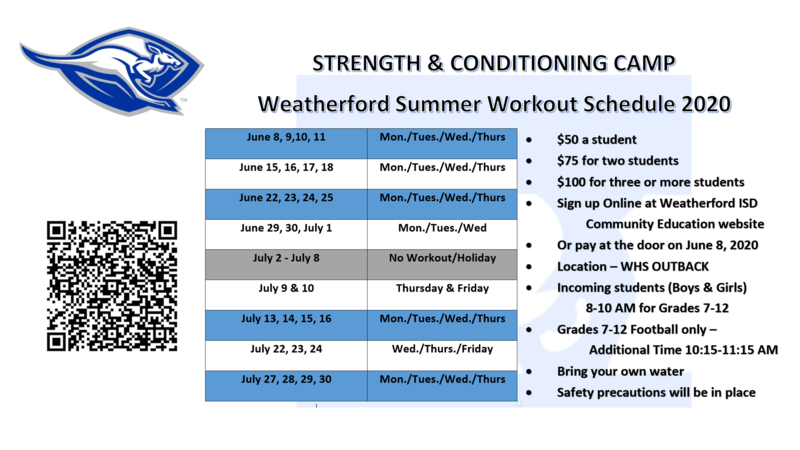 Camp starts June 8th and is open to incoming 7th through 12th grade boys and girls.

Course registration for students new to Weatherford High School will take place August 4-6, 2020. The registration process will be communicated prior to these dates.
Read More »
Published May 29, 2020 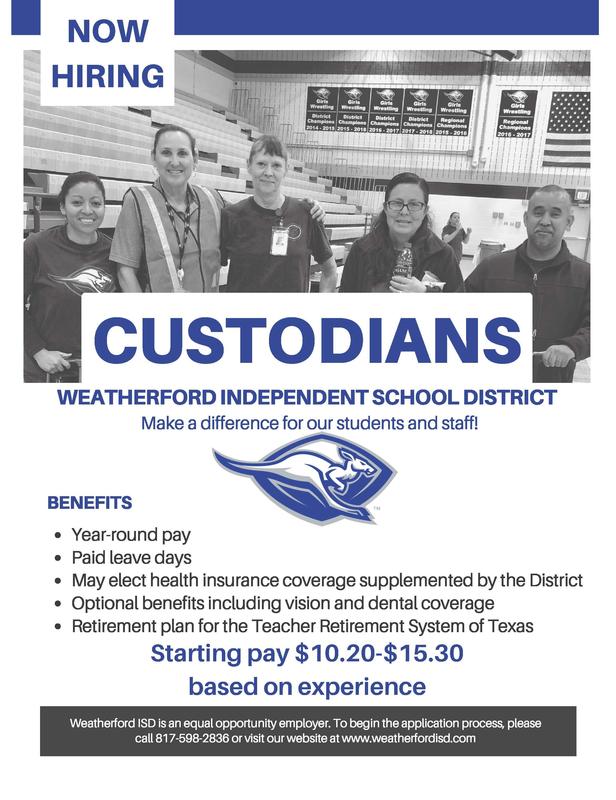 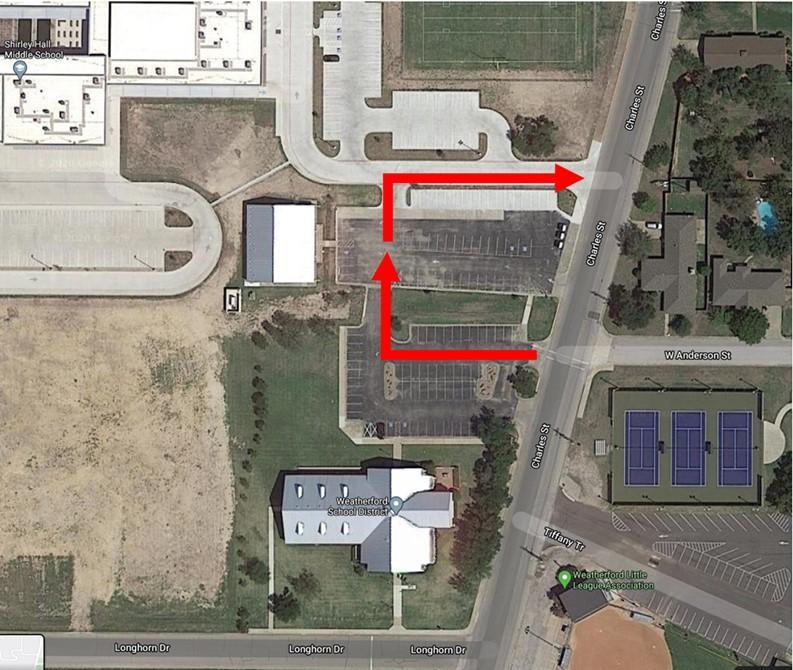 Students who were issued a Weatherford ISD technology device for learning at home during the COVID-19 closing may begin turning them in next week. These devices (iPads, Chromebooks, and Hotspots) can be returned to the campus on the scheduled date that has been shared with families or you may return them to the Technology department, located at 1100 Longhorn Drive, on the following dates/times. (Please see the attached traffic flow pattern.)

Please note: If your student is participating in a WISD sponsored summer school program, devices will be returned when school resumes in the fall.
Read More »
Published May 20, 2020 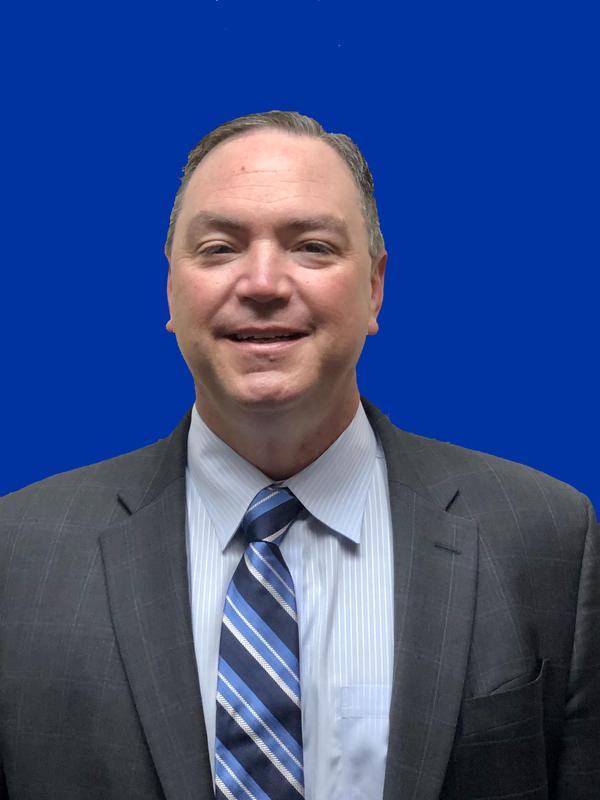 Following a search process that began in March, Weatherford ISD is proud to announce its new superintendent, Dr. Beau Rees. The district’s Board of Trustees named him as lone finalist on April 9, 2020, and after a state-mandated 21-day waiting period, unanimously named him superintendent of schools at a Special Meeting held on May 4, 2020.

To read more, please click on the headline.
Read More »
Published May 4, 2020 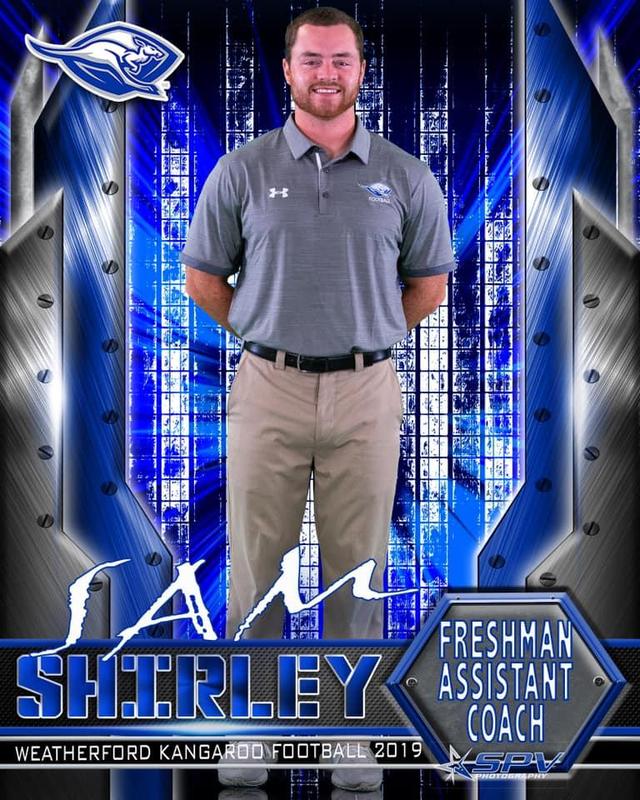 Weatherford ISD Mourns the Loss of WHS Teacher and Coach

It is with a heavy heart that we announce services for Sam Shirley, a social studies teacher, and JV coach for baseball and football. This is an incredibly sad time for our high school family and for our students who had Mr. Shirley as a teacher or coach.

The family has requested that any of his friends or colleagues that come to the service to wear Roo Blue in his honor.
Read More »
Published May 3, 2020